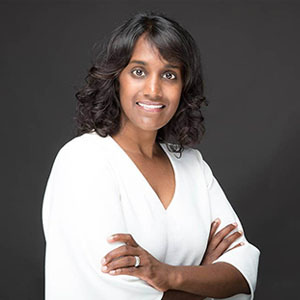 Lakshmi has exclusively practiced immigration and nationality law for more than a decade. She has successfully represented numerous individuals and companies through various complex immigration pathways. Lakshmi’s attention to detail, responsiveness, and personal attention to each case has shaped her strong reputation. Furthermore, Lakshmi understands the needs of immigrants as her family immigrated to the United States from Tamil Nadu, India. Lakshmi is fluent in Tamil.

Lakshmi is recognized as an Illinois Super Lawyer in the field of Immigration and Nationality Law, she has a 10.0 AVVO lawyer rating, was elected to be a Delegate to the Democratic National Convention, and was featured in Voyage Chicago for her expertise in immigration law. Lakshmi is a frequent presenter on immigration law topics within the community and serves on non-profit boards, volunteers through her children’s schools, and serves as pro-bono counsel for clients in need. Lakshmi is a member of the American Immigration Lawyers Association (AILA), Chicago Bar Association (CBA), Trusted Advisors Council (TAC), and North Shore LAW, a collaborative of women attorneys.